Last race before State Championships! It’s also Homecoming weekend and arrangements have been made to get High School racers back to Boise in time for the dance. Please talk with your team leaders if you are still looking for a ride back.

We encourage our high schoolers each year, to be involved in both the Idaho League race and Homecoming and are excused to miss awards. We will ask our middle school racers to step up to the podium to accept any awards for our HS racers.

What you need to know this week

Homecoming Assembly – Friday at 9:00 AM

Location and Entry to In_Field – same as Bike Skills Camp, but much bigger

Can’t wait to see everyone at Jug! Safe travels!

Communication – Your Team Director travels tonight after practice (Disney theme). Again, we will not have phone or Internet access at all unless you are South of SNRA Offices. I was sad to miss many of your texts, emails and voicemails last Thursday & Friday, so please plan ahead with your questions and logistics.

Carpooling – Sharon will be managing the Carpooling again for bikes and people.

Future Volunteers – First, Thank you for all you have done thus far!

Merchandise – Second Team Order is in. Please bring your exchanges to practice tonight or the race.

Travel safe and bring your winter gear. See you in the In Field!

It’s beautiful here at Grand Targhee Resort (GTR) and we are looking forward to you joining us tomorrow. Here are some updates for your arrival:

That’s all I can think of to assist you on your journey. Oh, don’t fret about the smoke filled air that you have to drive through. It’s clear in the mountains! 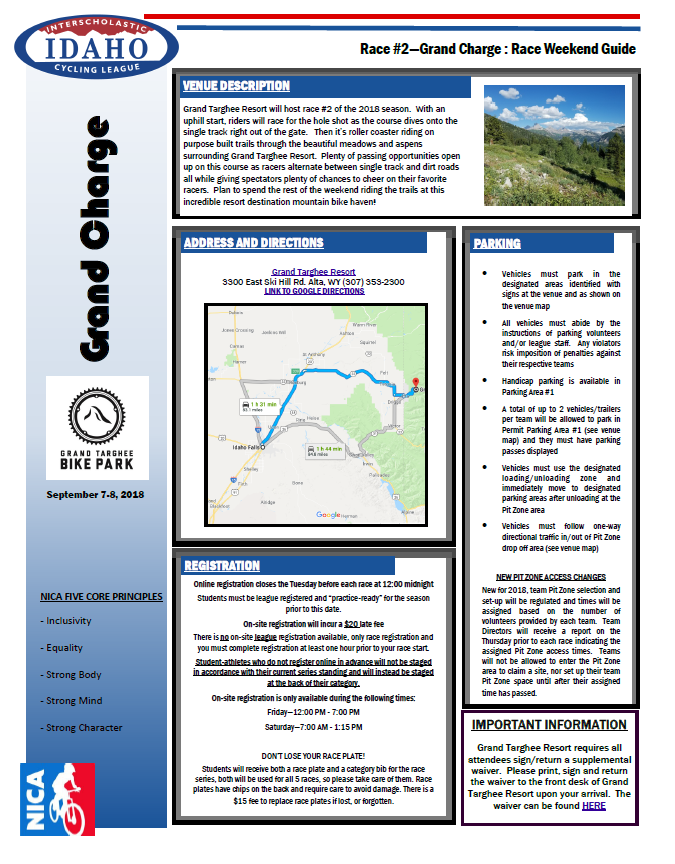 Welcome Back! I hope everyone had a wonderful weekend! We are short on time this week, so let’s get right to it.

Grand Targhee – BBMTB will continue to provide Saturday Breakfast and Lunch for all riders and Coaches/Ride Leaders. You on on your own for Friday night dinner GTR Race Flyer – http://www.idahomtb.org/wp-content/uploads/2018-GTR-Race-Flyer.pdf